Could DAOs work for traditional clients? 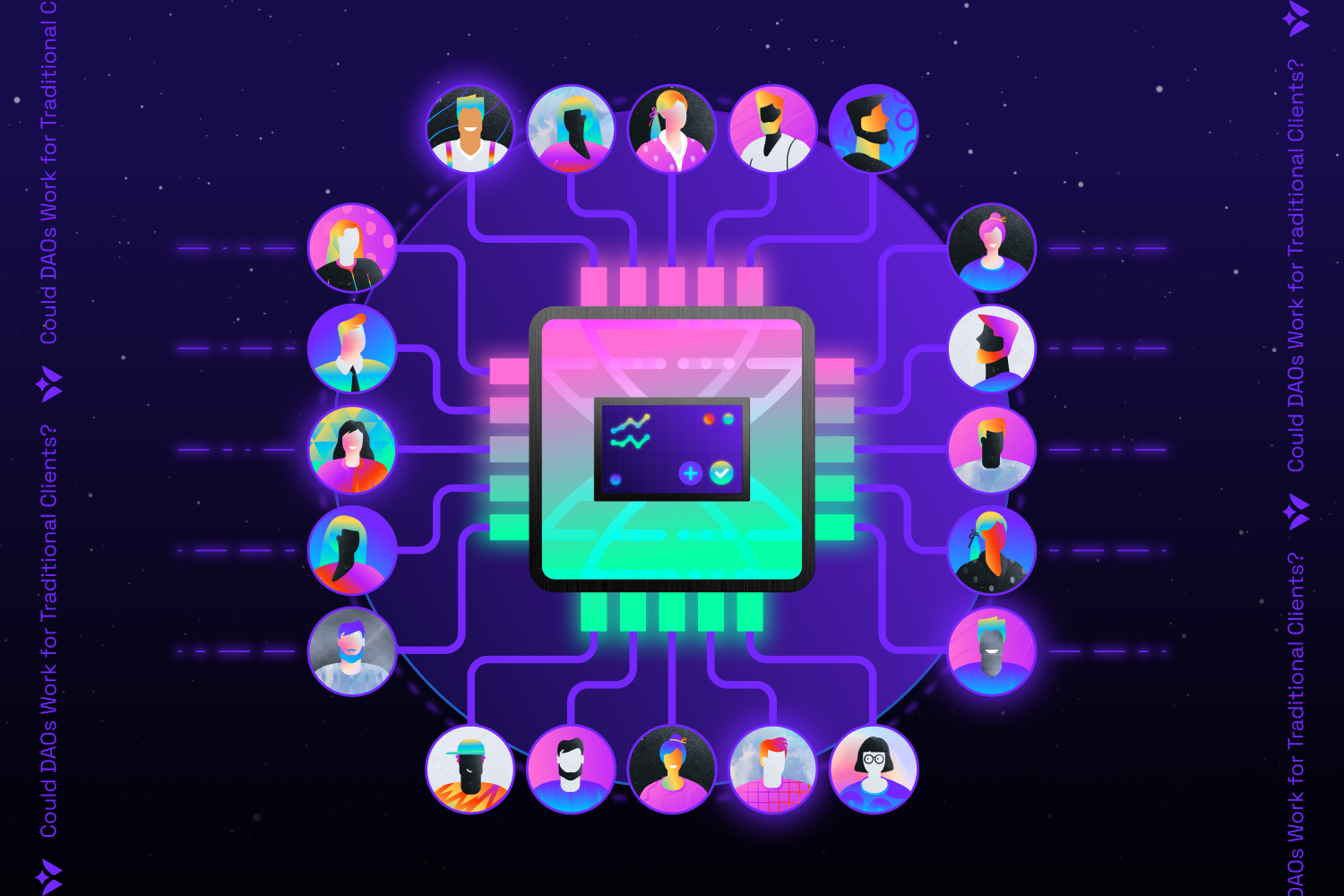 I’ve been here before. I get wowed by technology and wowed by the potential– only to see things fizzle. After 30+ years in the digital world, I’ve seen this phenomenon over and over again. Does anyone remember Segway or Google Glass? Game changers, pundits said. “Ho hum” they were. But this time, it feels different.

Blockchain's ability to enable traceable, transparent, and honest transactions without the need for oversight feels big– really big. Why?

Because transactions are at the heart of how we exist. We exchange money, make agreements, and create rules of engagement. Blockchain can do this in a way that enables trust and transparency.

That’s why DAOs feel different to me. Decentralized Autonomous Organizations, aka DAOs, leverage blockchain to let people work and collaborate together. People come together around an idea, then discuss it, craft it, build it, and own it– fully. But there isn’t “really” anyone that’s in control. Smart contracts are. Meaning there are some coded, open, transparent rules that everyone follows to participate in the DAO. Participating in a DAO usually unfolds this way. A few folks have an idea and do the heavy lifting to get the ball rolling. Then, they begin to propagate their project to other people with similar interests. Finally, people join the DAO and start contributing.

It is a mind blowing idea for someone who’s been in the “DAO” of digital projects.

In 1993, I hacked the game Myst. This game allowed players to immerse themselves into a surrealistic island filled with structures, plants, sounds, and videos. I figured out that through software, you can stitch together sound files, images, and videos to create a world that feels like it exists but doesn’t. That experience sparked my desire to make my own metaverses. And make them I did.

As a producer, I’ve led designers, programmers, writers, and QA folks to make something that they couldn’t possibly make by themselves–like a conductor at a concert, making a metaverse symphony.

But the symphony was hand-picked and co-located. We talked to people IRL, vetted their resumes, then got them to sit near each other and make metaverses together. In the same room, during the same hours, and I was there to make sure it happened right– because doing it from home wasn’t an option (no one had broadband…you were lucky if your office did and if it did and it was measured in kilobytes, not megas or gigas). It was cool, amazing, and it changed the world.

But now DAOs flip the script. Who needs someone in charge, pulling the strings? Instead, come up with an idea, get people on board with the idea and make it together. Not just the actual building, but the decisions about it too. Why? Because you own what you do! No more complaints about decisions because so and so doesn’t know what he’s talking about. You are so-and-so. A snowball of making stuff that can lead to a utopia.

And real things get made that can be useful. LexDAO, for example, materialized from a group of legal engineers looking to leverage blockchain technology for increased accessibility to basic legal services. LexDAO has built LexLocker, an escrow system for holding deposits while goods or services are delivered without needing to rely on a bank or another third party. The group has even come up with a method for providing an arbitration service. Very cool. Very exciting. Very 21st century or even beyond.

Can you get a DAO community motivated to make stuff for someone else (and them)?

Big companies like salesforce, IBM, (fill in the rest of the Fortune 500) need to make stuff.  And, they often make stuff we like and want. They’ve nearly perfected making things we like and want.  Think Apple, Tik Tok, or Google. These companies have become staples in our everyday lives.

Could a DAO community be motivated to build something for General Motors?

My gut tells me that it could, but the conditions have to be right. Some examples of that include:
‍

So, if you can potentially get a ragtag bunch of folks to work on something, the client side might prove even harder.

Can you get clients on board?

Companies, especially public ones, are extremely risk averse. Investors reward predictability. That’s why consultancies like Accenture, McKinsey, and Deloitte command 50% margins. Those companies have such scale that they can be more predictable/reliable especially for the big stuff.

DAOs, especially in its current state, are far from predictable. The sheer number of people joining DAOs is staggering because it’s so easy to join. The number of different folks that ultimately contribute is small compared to who is involved. And there is no single “throat to choke.” Seems like a wild west show to say the least.

But, where there’s a wild west, there’s also opportunity. Because if you can control certain things and show the opportunity, companies might be able to get on board:

These points are just the tip of the iceberg, but hopefully it clarifies how to present DAO practices  to clients. Now that we’ve gotten clients on board, let’s talk about how governments might react to all of this.

Governments are notoriously slow to adapting to technology and often take a wait and see approach. While this can be to the benefit of the technology so that it can mature, it can also lead to hesitation since the rug can be pulled out from underneath it with little notice.

That being said, if there is money to be collected, governments will get on board somehow. Consider the marijuana industry. The US Federal government does not recognize marijuana as a legal substance but yet it has grown to a $13.2 billion in 2021.  Consequently, the Internal Revenue Service in 2015 adopted guidelines via memorandum so that organizations in the industry can pay their fair share of taxesa If there is a will there's a way.

Same will happen with DAOs: if there is enough momentum, then governments will follow suit.  In fact, places like Wyoming, Switzerland, and Estonia already have taken steps to recognize DAOs with the Republic of the Marshall Islands (RMI) officially recognizing it.  Some of the considerations governments will need to contend with:

It’s pretty clear that these questions will need solid answers eventually but in the meantime these gray areas allow for the DAO to prosper. To play it safe, it’s probably best to contact an accountant and/or lawyer to guide you on your specific situation.

All in all, given that most DAOs are in their infancy, there are challenges for many clients to get on board. But given the right circumstances, and the right tooling, it can be experimented with successfully. And with tools like Wonder leading the charge, it will be fast to get rolling.