Post-Individualism and The Evolution of Identity in Web3 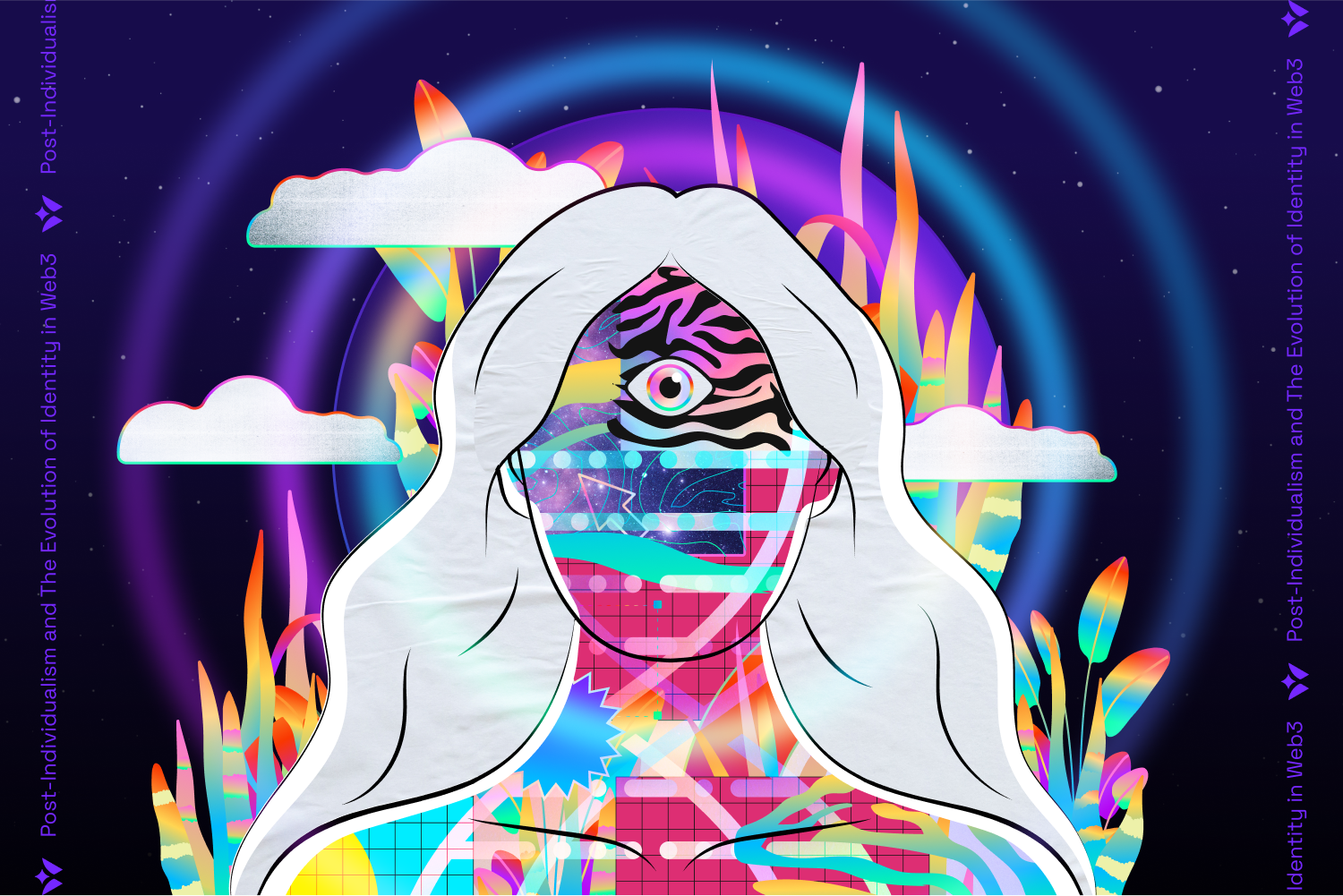 If someone asked you what your identity is, what is the first thing that comes to mind?

Our identities are an intricate lattice of both visible and invisible threads, chosen and given. For centuries, humans have been marginalized, segregated, and murdered for their identities, whether it be race, religion, sexual orientation, disability, or otherwise. In spite of the hardships some face, our identities have also given us connection, community, and the opportunity to redefine, celebrate, and embrace our shared traits. Web3 has changed the way we signal our identities to others to form communities and create change.

Our online identities give us the choice to signal who we are to others, like the illuminated screens of a Teletubby's belly. As Web3 evolves, it moves closer to celebrating the diversity of identity and intersectionality instead of separating and excluding people because of it. In this space, we are valued for our minds, accomplishments, and choices. We are born individuals and find our communities through our decisions.

With the development of blockchain technology, the decentralized web, and DAOs, these signals form organizations that can accomplish the unthinkable. Communities with shared identities and values can empower each other, accumulate wealth, and change the world.

In the early 2000s, the world was swept up by Facebook, with Instagram soon to follow. We were now expected to show photographs of ourselves as markers of our identities, instead of whichever sparkly GIF or A/S/L combo we wanted to be that day on AIM or Myspace. From the rise of social media up until the last few years, the internet has encouraged us to be individuals. Every person is publicly one-of-a-kind, which made us easy to advertise to and become advertisers ourselves. We became addicted to the dopamine rush of likes and followers.

I and millions of others worked tirelessly to build audiences in the hopes of making careers out of our creative passions. The journey upwards is exhilarating until you realize the demand for output to grow or even maintain an audience is draining and unsustainable. Unless you have millions of followers, financial freedom through centralized social media is an empty promise.

🫂 “Regardless of what anyone claims about individual sovereignty, I think most people in crypto are fundamentally looking for some kind of social solidarity. It feels as though there’s a movement, there’s an ideology, there are other people to talk to, you coordinate with them, and you make decisions together.” - David Phelps on episode 43 of On The Other Side Podcast, in conversation with Chase Chapman

I had known about cryptocurrency for years, but I didn’t learn what decentralization truly meant until late 2019, right before Covid-19 changed everything. By that point, I was freelancing, trying to make it as a blogger while having dozens of other side projects going on at the same time to make ends meet.

When the pandemic began, I was living in a 1-bedroom basement apartment in far South Brooklyn by myself. Suddenly, I was back in my early 2000s teenage bedroom, chatting away on Discord with people who shared the same interests as I did. My sense of nostalgia towards Vampire Freaks and Myspace HTML customizations returned. I found myself being vulnerable online, making friends, real friends, and discovering that my skills and work could be rewarded, both financially and, in a more profound sense, emotionally.

I became very curious about how the feelings surrounding identity were changing in this new era of the internet. Over the prior decade of being a person on the internet, the floor was littered with eggshells, becoming ever increasingly hard to avoid. Identity was everywhere, but it was also nowhere.

After testing the waters in my newfound online tribes in Web3, I realized that people wanted to have conversations. Something amazing happened. I was finally able to feed my insatiable curiosity by asking questions without fear of retaliation. In fact, I discovered communities like RADAR DAO that encouraged, even rewarded, those who started pulling at the threads of the perceived rules surrounding identity, individuality, and representation.

So I began asking people how they felt about it.

Since coming out as trans, my younger sister Daniella has blossomed into the incredible person I always knew she was. After my dive into Web3 and NFTs, she and I have had many conversations about the intersection of her identity and her online presence. She kindly agreed to contribute to this article.

When I asked her what role digital identities and avatars played in her life, she said,

“I remember the first time I made myself a female character. I was playing Fall Out 3 when I was 12. I wanted to do it way before that, but it felt wrong because I was a boy. I felt this urge to play out life as a girl but at the time, I didn’t understand why. I didn’t understand why for a long time, but now I do.

For me, video games were an escape from reality, and when I realized I was trans, it became obvious why I spent so much time playing them. I still enjoy gaming, but it’s not the crutch it used to be.”

The conversation turned to her experience coming out on social media and if it matched her expectations,

“My PFP on Instagram was always a female character, like a screenshot from a movie. I review movies online, so that kind of gave me the opportunity to try it out. For a while, it was Megan Fox from Jennifer’s Body covered with blood. I would look at my Instagram and feel gender euphoria. Now that I’m out and trans, my profile picture is me. I used to never take selfies, now I can’t stop taking them.”

I asked her what I’ve been asking everyone these days, which is how online avatars have shaped her real-life identity and sense of individuality,

“I’d say avatars gave me inspiration for who I am now. I would make my avatars goth and now I dress goth. They used to be based on who I wish I could be, now they’re a reflection of who I know I am”

☠️ “Sometimes I can hear my bones straining under the weight of all the lives I'm not living.” - Jonathan Safran Foer, Extremely Loud & Incredibly Close

Web3 has given us an entirely new myriad of identity signals to choose from. From Twitter enabling NFT profile pictures with Instagram following suit, to using our ENS addresses as our social media names, to circulating niche memes, we have endless new ways to express ourselves. Crypto Punk PFP? You were likely here early. Bored Ape? You’re likely wealthy, a diehard NFT degen, or both. Low-resolution photo of Jack Nicholson wearing sunglasses and grinning? You’re probably Wint.

These signals work as lighthouses, bringing you closer to the community you’ve always been searching for.

A friend from RADAR responded by bringing up the Proteus Effect, which is the tendency to sway our personalities based on our digital avatars. One specific example from Stanford University's Virtual Human Interaction Lab was a study where people were assigned avatars in a VR game. The people assigned superhero avatars were more likely to perform acts of kindness or help others in real life after the study. This opens up another question. Do we shape our online personas based on our identities, or do our online personas shape our IRL identities?

It’s impossible to talk about Web3 and identity without talking about the issue of doxxed vs. undoxxed people in the space.

Many will say they prefer doxxed teams, understandably so, from the widespread use of identity politics to gain traction for NFT projects like Fame Lady Squad, which claimed to be ‘women-run,’ but ended up being run by men after selling over $1 million USD of NFTs. However, It’s hard to separate anything in crypto from anonymity when the founder of crypto is the pseudonymous Satoshi Nakamoto.

Anonymity in Web3 is a double-edged sword. In the words of my friend Tjark from PoolTogether,

🧠 “It often takes away the bias and puts a focus on the important things.”

Throughout my gradual fall into Web3, I found myself talking to people every single day from all over the world who share my interests and passions. It’s my full-time career now, and the dynamic is so different from my experience in Web2. Diversity and identity are genuine priorities because we want to build a future where people with different lived experiences and perspectives have contributed. That makes us stronger.

It boils down to this. When I talk about my work in Web3, I use words like we and us because I feel a part of something meaningful, something bigger than myself.
‍

In Web3, I have been embraced for my work, dedication, and intellect. I have been inspired by so many intelligent and extraordinary people, then pleasantly surprised when they wanted to become friends. I have made mistakes and have had people explain why they were wrong instead of shaming and excommunicating me. I have been rugged and was not mocked, instead, offered support. I have been given opportunities to grow, and most importantly, the signals I have been sending were finally received, and I have found my community of like-minded people.

Web3 will continue to change the world because we are rewarded for our work, not for how good we are at pretending to do it. We are allowed to explore until we find a home to signal together. Web3 allows us to grow, change the global class system, redistribute wealth, and build, together.