The Rebirth of the Creator Economy 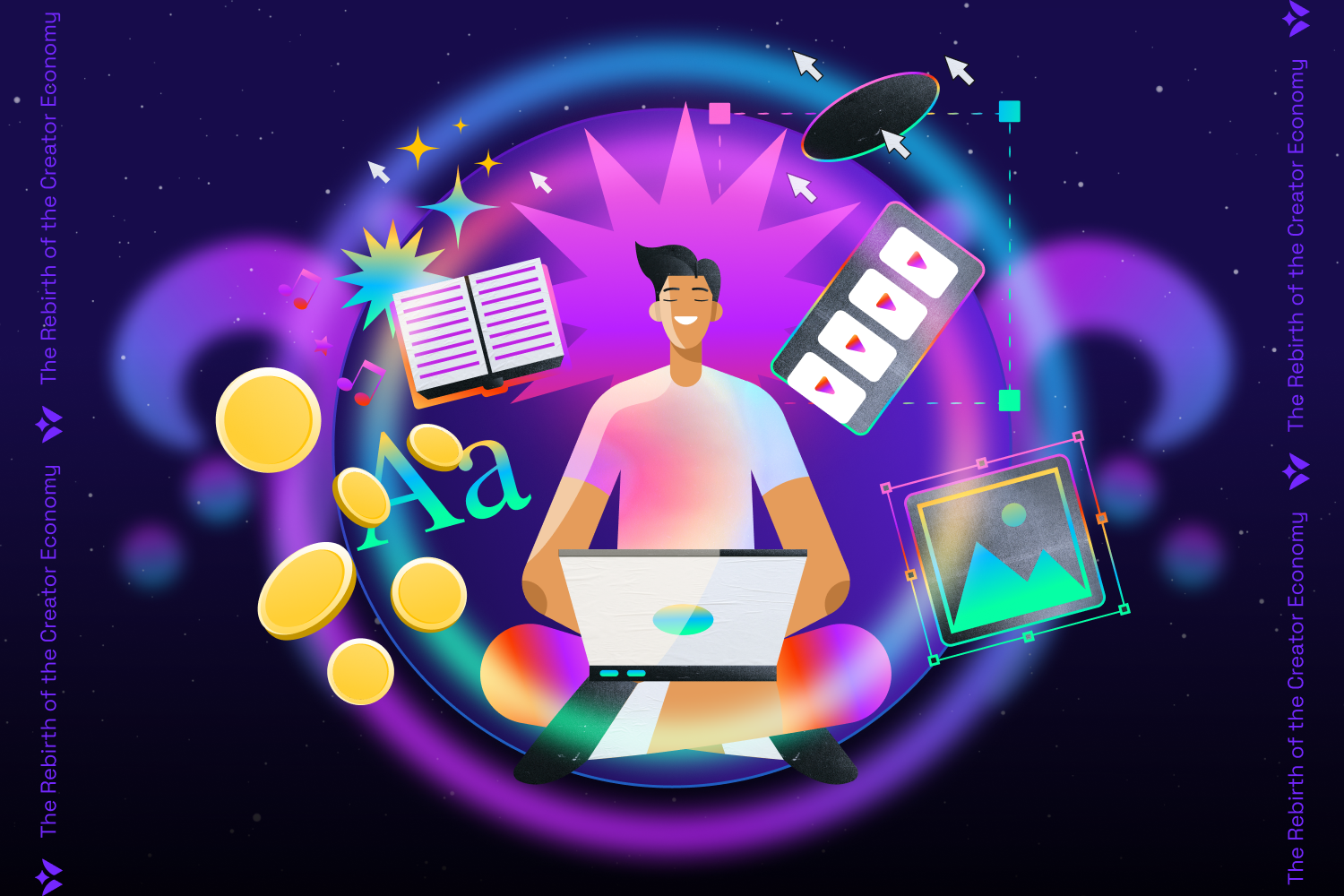 Web3 has become the fertile soil for a boom in the growth of the creator economy. In this article, we explore what that means, for the future of digital technology and its sustainability.

What is the creator economy?

The creator economy is the economy powered by over 50 million creators (writers, vloggers, etc.) and digital platforms such as YouTube and Instagram. It is a market where anyone can build a following and monetize their skills.

For platforms such as Instagram, the creator economy has been pictured through “influencers” who curated a perfectly polished image for their feeds. Twitter, on the other hand, is well known for its raw element.

The creator economy does not just consist of influencers and YouTubers–it also consists of educators, curators, and communities.

Today, the creative industry contributes $2.25 trillion in annual revenue to the global economy.

How did the creator economy come to be?

Social media was initially created as a tool for connection. It focused on news feeds of posts by friends and family sharing their daily adventures.

But when Facebook launched its ad model in 2007, this changed completely. Youtube followed two years later. Social media was no longer a shared diary. It was an advertising platform.

As social media grew its user base, the advertising aspect of it developed into a major industry. Brands were generating a significant new source of income. Ordinary people were garnering millions of followers, an experience synonymous with fame.

This cultural shift saw creators promoting brands on their profiles at the behest of our capitalist overlords in exchange for free products but soon after, creators were put on the payroll. YouTubers also earned money from Adsense. Realizing that they could build their own brands, creators changed the landscape of digital platforms for good. Advertising would never be the same.

How has the creator economy changed our lives?

For decades, there was no room for independent creators. For creators to get their ideas across on a large scale, they needed to go through “Big Media” companies. Consequently, creators depended heavily on Big Media’s approval. A major roadblock, however, is that reaching out to Big Media still required a “way in” or being employed by said media companies. Without the right connections, it was challenging for creators to materialize their ideas.

However, thanks to the internet, a marketplace where creators can make a living was formed. The idea of making an income from one’s creations was now attainable.

Problems with the creator economy

The absence of a creator middle-class

In a society, a healthy middle class promotes social trust and a stable source of demand for goods and services, thus driving innovation.

There is a significant income gap between the top earners and the majority of creators across platforms. For example, the top 3% of creators on YouTube earn over $17,000 a year in ad revenue. This requires an average of 1.4 million views a month. According to the Social Media Examiner, Facebook pays $8.75 in ad revenue per 1000 views.

In 2017, only 2% of creators on Patreon made the minimum US wage of $1160 a month. Unlike other platforms, Patreon does not have any discoverability tools, so creators are forced to build a following elsewhere before they can launch a Patreon successfully.

‍Spotify remains notorious for underpaying artists. Artists need 3.5 million streams a year to make a minimum wage of $15,080 for a full-time worker in the US.

The reality is that the creator economy landscape is a microcosm of the greater economy, where wealth is concentrated at the top.

The current social media model makes it impossible for creators to take needed breaks as it means they will lose engagement. After losing engagement, it is hard to recover, which has a major effect on a creator’s income.

It is like a hamster wheel you can’t get off. There is a lack of openness from platforms about how their algorithms work and the changes that occur. Creators are constantly competing with these mysterious algorithms to get their content seen–lack of transparency combined with the energy needed to create content leaves most creators burnt out.

Today’s economy is knowledge-based. To maintain market dominance, Big Tech companies need to continue manufacturing new ideas. Unfortunately, intellectual property (IP) is not well protected, so it is easy to replicate existing ideas. It is especially easy for Big Tech companies to steal ideas from small creators as there is no market competition between them.

Because corporations and big tech still want to dominate the economy no matter the cost, the issue is hard to resolve. There is a war against Big Tech and our Intellectual Property (IP).

Apple and Google have both been caught out for taking advantage of the power imbalance between them and smaller creator companies.

Web3 is an internet powered by its users. It is based on blockchain, which enables decentralization and a middleman-free digital economy.

Power that once belonged to Big Tech is transferred to the People, allowing them to interact freely across platforms and be rewarded with financial and social incentives.
‍

How is web3 changing the creator economy?

In Web3, the definition of creator is changing as power dynamics shift from the platforms to the creators and communities.

What are the solutions and how is web3 enabling them?

‍DEIP, a leading builder in the web3 creator economy, is designed to support creators and intellectual property rights (IPR).

Some of DEIP’s core aims are:
‍

According to DEIP, creative industries and their creators are set to become major drivers of the future economy.

In web3, creators will no longer have to compete against mysterious algorithms.

Having access to this information removes the burden of creators having to guess how algorithms function.

Web3 infrastructure is decentralized, giving fans a trustless means of supporting their favorite creators. On traditional platforms, there is usually a barrier of entry to being monetized, such as having a certain amount of followers.

Anyone, from a collector to a fan, can buy an NFT and make a financial gain by reselling it on a secondary market. NFTs allow for both creators and fans to be rewarded.

‍Web3 exposes us to a more sustainable creator-driven economy. By encouraging collaboration and giving power to the users of platforms, communities are able to thrive. Creators are able to form longer-lasting relationships with members of their communities and invest more time into their creations–rather than dealing with the uncertainty of algorithms.