Web2 vs. Web3: Why Web3 Is the Future of the Internet 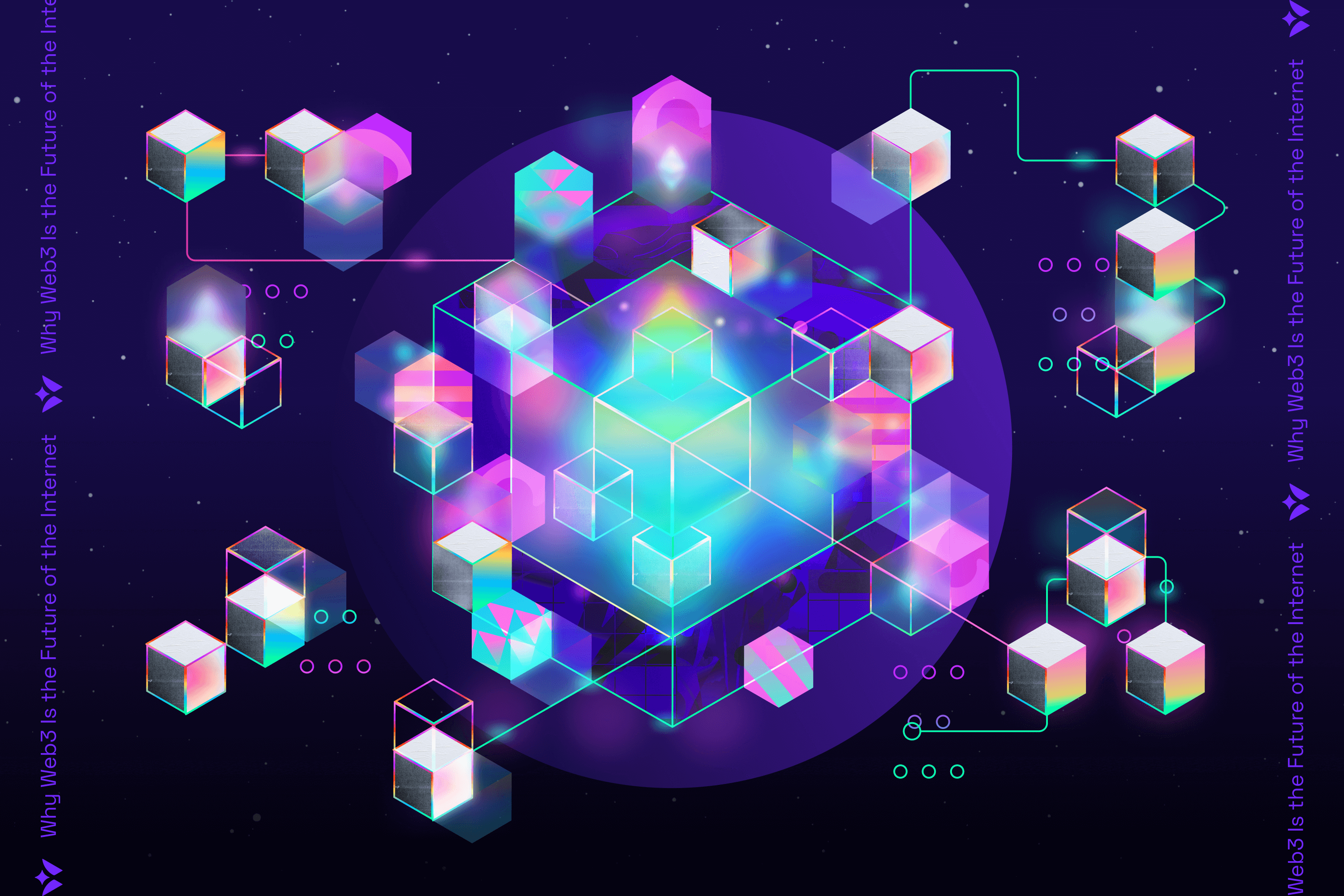 For every successful innovation throughout history, thousands of ideas didn’t make the cut.

But even when one idea succeeds, it doesn’t mean it’s the optimal choice. It simply means it’s the best choice for now.

The problem with most successful innovations is that end users don’t notice their drawbacks or the pain of the problem isn’t enough to warrant a change. That is until someone becomes fed up with the status quo and demands better.

Right now, web2 is the status quo, and while it’s made significant contributions to our world, it’s time for the next level—web3 and the blockchain.

In this article, you’ll find a brief overview of web2 vs. web3, but most importantly, how it’s solving web2’s drawbacks.

What Exactly Is Web3?

Web3? What the heck happened to web1 and web2?

Well, web 1.0 (developed by Tim Berners-Lee) was the first version of the internet where companies created static pages to share information with people. At this stage, there were no interactions between users and they rarely produced content since it required technical skills.

The next iteration of the internet was web 2.0 (what we use now). The main difference from web1 is that users can easily share their own content —for example, on social media or blogs.

But with web3 (coined by Gavin Wood) on the horizon, we’re about to transition to an internet where individuals have more control over their digital assets, content, and identity.

While we’d like to give you a concise definition of web3 (or web 3.0), it’s difficult to pin down this evolving technology.

Is it all about sovereign ownership and immutable blockchains? What about NFTs and the metaverse? Permissionless cryptocurrency payments, anyone?

The truth is, web3 encompasses all these features, and more, through the power of artificial intelligence, smart contracts, the semantic web, and decentralized networks. So while ownership is a core value of web3 — and one that advocates enjoy preaching — it encompasses much more.

Web3 is a new paradigm that promises to reduce fraud, improve the power balance between users (customers) and organizations, and revolutionize our monetary system.

Its main features include:

Progress brings tension between innovators and those who want to maintain the status quo. In this case, it’s web2 vs. web3, central authorities vs. democratic organizations.

Web2 is the internet we know and love today. It allows us to access information with a few clicks or share our content with anyone worldwide.

But one major drawback is that large corporations control access to this information.

For example, in recent years, Mailchimp has prevented multiple crypto content creators from using its email platform. And not just fly-by-night coin shillers, either. The list of excluded creators includes the Ethereum foundation’s Ecosystem Support Program.

On the other hand, social media platforms — like Facebook — profit from user data by giving advertisers access for a fee while controlling the user experience to their benefit.

In web2, individuals are passengers while corporations and governments are in the driver’s seat.

Here are three ways web3 and blockchain technology is changing that.

1. Web3 Gives Power Back to Creators

Web2 gatekeepers are notorious for profiting off and taking advantage of creators, but web3 cuts these central authorities out of the equation.

Influencer Marketing Hub estimates that an average YouTube channel receives $3-$5 per 1,000 views or about 25% of total earnings. So for all a creator's hard work, they don’t even get a majority share of channel earnings.

In 2022, over 50 million people call themselves creators. But only 6% of these people make enough money to consider it their career.

It’s not easy sailing for successful creators, either. Web2 social networks have the power to throttle creator revenue whenever they please. For example, YouTube can demonetize user-generated content that breaches its terms and conditions which a small group of decision-makers manages.

Other times, these platforms succumb to governmental mandates or decide to change their algorithm, severely impacting creator earnings.

A prime example is cannabis-related content creators. YouTube is known for suspending and demonetizing channels that share content about the plant. While they’ve loosened restrictions, there are only certain types of cannabis content that creators can monetize. And there’s always a risk that channels can be demonetized if they breach YouTube’s T’s and C’s.

Web3 flips this switch, giving creators a chance to build content without having to abide by strict guidelines or getting kicked off a platform because of what they share.

An example is the Odysee platform, a video site where creators can speak their minds without fear of censorship.

The site also gives creators control over how they monetize their channels while allowing viewers to skip ads for a few dollars per month. Whereas on YouTube, creators have minimal control over monetization and ad-free accounts cost $11.99 per month.

So in the web2 vs. web3 debate, we think web3 gets the point here.

Traditional companies and projects rely on top-down management, where a small group controls decisions. Instead of this scenario, web3 democratizes decision-making, involving end users in protocol changes. This functionality ensures that web3 companies align with their end users.

On the other hand, web2 platforms tend to make changes based on self-preservation rather than user experience. So whether a policy change benefits the end user is irrelevant. It’s about the survival of the company.

In contrast, many web3 projects operate (or plan to) as DAOs (Decentralized Autonomous Organizations). This governance model prioritizes community by allowing members to own a share of the project and often gives them governance (voting) rights.

DAOs are widespread throughout web3 regardless of project type, from philanthropy and non-profit projects, like Big Green DAO, to financial protocols, like Yearn.

DAOs flip traditional company governance on its head. Instead of a pyramid approach where a few people make the highest impact decisions, DAOs allow users to vote on protocol updates.

Right now, projects are still exploring the best governance for DAOs, leading to many voting mechanisms — for example:

But regardless of the voting mechanism, DAOs epitomize the best benefits of web3 — censorship resistance, transparency, and community empowerment. Seems like web3 scores another point in the web2 vs. web3 face-off, no?

If DAOs sound like the right way to govern your project, learn how to create a DAO with Wonderverse.

Anyone with an internet connection and a laptop (sometimes only a phone) can interact with web3. In contrast, many web2 interactions require personal data, such as email addresses or sensitive financial details.

The way web3 sidesteps web2 requirements is thanks to decentralization, which ensures that one (or a handful) of entities can’t control access. That’s why decentralized protocols don’t need to follow government regulations, such as KYC (Know Your Customer) compliance.

An example is the recent Tornado Cash debacle. The U.S. government sanctioned the protocol, causing central authorities, such as Amazon’s AWS, Google, and GitHub, to prevent access through their services.

On top of this, DeFi (decentralized finance) removes the need for intermediaries — like banks — and replaces them with peer-to-peer transactions which:

DeFi also brings unique financial products, such as non-liquidatable loans, which are vital in the current volatility of web3. A popular protocol providing this service is Alchemix. The dApp allows users to deposit collateral and take out a self-repaying loan of up to 50% of the deposit’s value.

It doesn’t matter where you’re from or your financial history. If you deposit collateral, Alchemix will allow you to lend against it while using it to generate staking revenue that pays down your loan. That way, users don’t have to sell their assets for liquidity.

Above all, web3 and DeFi provide opportunities to individuals who’d otherwise miss out because of their income level or lack of identification.

Opportunities Are Endless in Web3

While web3 applications haven’t reached mainstream adoption yet, there’s no doubt that the innovations it brings will put the web2 vs. web3 argument to rest.

It’ll also transform how we work and how organizations find workers. Web3 allows people to work on varied projects or dedicate their time to a single cause without being restricted by employment laws. In turn, this makes it easier for projects to discover talent.

At Wonder, we make it simple to identify web3 projects to work on or source talent from around the globe. On our platform, you’ll find DAO project management tools, vital web3 integrations, crypto payment capabilities, and countless tasks for contributors.

So whether you’re a DAO looking for talent or contributors looking to work on epic projects, Wonderverse has you covered.

What are you waiting for? Ape into the Wonderverse and start building in web3 today.