Web3 Developer Salary: What to Expect From This Career Path 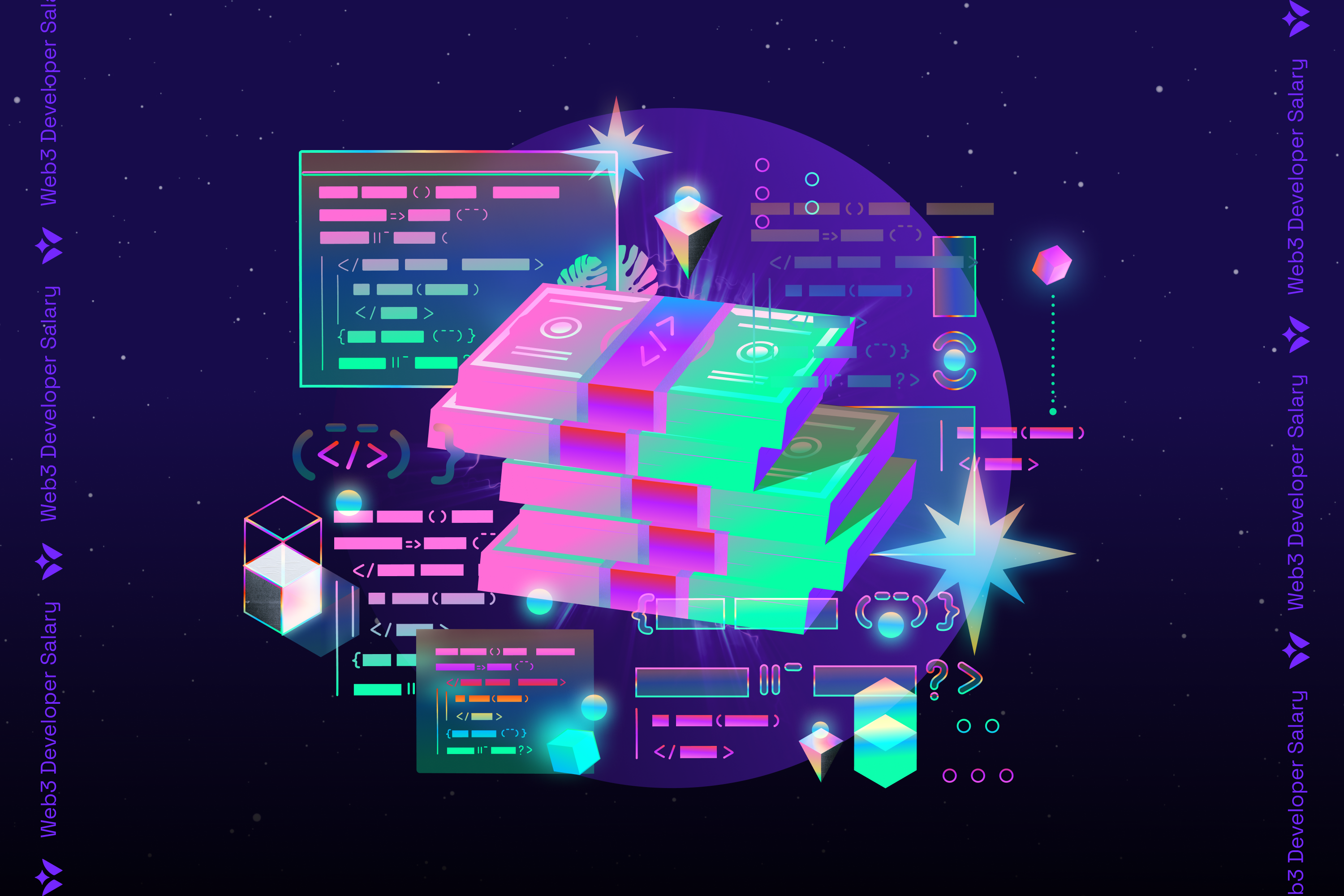 Blockchain is one of the fastest-growing technology trends in the world. According to PwC research, most leading global companies are using or exploring how to integrate blockchain into their businesses.

This is good news for you if you’re interested in becoming a web3 developer. Web3 developers are among the most sought-after professionals in today’s tech world, and the demand for their services continues to grow.

In this blog post, we’ll explore what you need to know about this career path and the average web3 developer salary. Let’s dive in.

What Do Web3 Developers Do?

The web3 ecosystem is vast, ranging from decentralized finance (DeFi) to NFTs to the metaverse. As such, there are many roles within the web3 developer umbrella, depending on your unique area of specialization.

Before becoming a web3 developer, you need to get familiar with blockchain technology, learn relevant programming languages, and acquire the right tech stack. A tech stack refers to the set of tools used to build an application.

While most academic institutions still don’t offer web3 courses, there are a lot of online resources available to learn web3 development. Platforms like Coursera and Udemy offer some of the best expert-curated learning resources. It’s possible to learn blockchain development in as little as six months.

The best way to learn web3 development is by programming web3 software and polishing your skills as you do so. Hackathons are handy as they provide a valuable avenue for developers to interact with other software engineers and advance their knowledge. You can grow from a beginner to an expert, full-time developer with the right resources and mindset.

If you’re interested in pursuing this career path, you’re probably curious whether there are enough opportunities to accommodate you. Let’s see what the web3 market looks like.

Are Web3 Developers on Demand?

The demand for blockchain engineers is at an all-time high. LinkedIn News reports that job postings related to web3 increased by nearly 400% in 2021 alone. And with new web3 startups springing up in every corner of the world, this trend will continue to grow.

Despite the increasing demand for web3 developers, there aren’t enough web3 engineers or developers to fill these positions. According to a Forbes article, almost every web3 or blockchain company is actively seeking developers. Market experts ascertain that the global crypto and web3 industry is facing an acute shortage, something that may stall its growth.

As a web3 developer, this healthy job market means more opportunities. Another advantage is that since web3 is a fairly new technology, many web3 developer jobs don’t require years of experience. Rather, there’s the option of learning and growing as you work.

Furthermore, web3 advocates for the full realization of decentralization, reflected in how web3 companies recruit. Most web3 jobs are fully remote, meaning you can work from anywhere in the world.

If these attractive factors don’t appeal to you yet, wait until you learn how much a web3 developer makes. Let’s take a look at the web3 developer salary.

Web3 Developer Salary: How Much Can You Earn?

With such a high demand for blockchain developers, companies are willing to pay top dollar to hire the right experts. In general, most web3 jobs pay better than similar roles in other industries, whether you are a web3 developer or product manager.

This range reflects your years of experience, location, and web3 developer stack. Web3 developers in countries like the United States and Singapore enjoy the highest rates. Years of experience make a difference, but there isn’t a huge variation in the duration of practice between experts and beginners.

Let’s take a look at the income rates for specific roles within the web3 umbrella:

Solidity developers create and deploy smart contracts that run on Ethereum, one of the largest and busiest blockchain networks. Solidity is the programming language compatible with Ethereum Virtual Machine.

Smart contracts are self-executing pieces of code that run when predetermined conditions are met. Smart contracts play an essential role within a blockchain network, making sure all the rules of the network are followed.

Frontend developers build the components of websites and decentralized applications, or Dapps, that users can see and interact with. This is usually referred to as the “client side” of web pages and applications.

Frontend development includes designing and optimizing the user interfaces and user experiences. Frontend engineers or developers use libraries such as Web.js and Ether.js.

Backend developers design the parts of webpages or applications which users cannot see or interact with. These mainly consist of databases and pieces of code. The backend is also called the “server side” of applications and webpages.

Backend developers use programming languages such as Java, NodeJs, C+#, and Python.

Fullstack developers program both the client side and the server side of applications. Fullstack engineers, therefore, must have a complete understanding of both the entire user experience on the frontend and programmable blockchain on the backend.

Rust is a programming language known for its safety, speed, quality, and multi-platform development capabilities.

Blockchain developers use Rust to write smart contracts. Solana, one of the fastest and most popular smart contract blockchains, uses Rust.

Due to the rapid growth of blockchain, web3 developers are some of the most sought-after experts in today’s technology industry. However, there aren’t enough web3 developers to meet the growing demand.

This supply-versus-demand mismatch makes the web3 developer role highly lucrative. Web3 developers enjoy some of the most attractive salary rates in the market, averaging over $101,600.

Apart from attractive remuneration, web3 provides excellent career prospects, given the sustained growth of blockchain. Without a doubt, a web3 career path is worth exploring.